The Finnish business sector has faith in the potential of the European Union even though many vital reforms have been overshadowed by the economic crisis. Europe can rise again if ambitious visions can be turned into concrete actions.

– The EU has faced one crisis after another. As the biggest structural defects of the EMU have now been repaired, the EU must give priority to growth and jobs in all its actions. Europe must be made competitive and attractive again, insists Jyri Häkämies, Director General of the Confederation of Finnish Industries EK.

Naturally, the acute refugee crisis must be solved in a determined way, and the new Europeans must be successfully integrated.

The Confederation of Finnish Industries EK assessed the European Union and its future in a project, which was executed in cooperation with Jan Store, former Permanent Representative of Finland to the EU. The work was based on interviews and workshops with Finnish business leaders and stakeholders. The conclusions and EK’s recommendations were gathered in the report Towards New Growth – Strategy for the EU.

The report sets out guidelines for turning European economy around and for improving employment levels. In order to succeed the focus needs to be on the key issues in support of growth and jobs. It is necessary to set realistic goals for the EU and to accomplish them in a determined way:

Seeking new markets outside the EU

New export markets outside Europe must be sought and successfully conquered. This is of vital importance as growth within the European Union is modest and the EU is not enlarging in the near future. Therefore, trade policy must be made one of the absolute priorities in the European Union, Häkämies argues:

– The TTIP agreement with the United States is crucial, and the negotiations must proceed with high ambition. Europe has much to gain as TTIP can open extensive markets also for SMEs.

Implementing the Single Market on all levels

The European Single Market must finally be set to function in order to enable efficient trade across borders. Implementation of legislation in member states has been insufficient, and therefore the Commission must supervise it more stringently than at present.

– Even with its shortcomings, the Single Market has been a success for Europe. For export countries like Finland, the domestic market has expanded several times over, giving a boost to eco-nomic growth and employment. However, this work is still unfinished, and the potential to be tapped is enormous.

Achieving the targets calls for enhanced cooperation between politicians, officials, the business sector, and other stakeholders. The European Union needs cooperation in order to succeed. 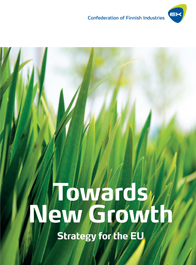 Read more in EK’s report Towards New Growth – Strategy for the EU:
www.ek.fi/EUfuture

More about this topic